The NDPI-tools allow to export cuts on slide-scans in the ndpi-format as a series of tiff-images. You can find an example image here

To install the tools, drag the link MRI_NDPI_Tools.txt to the ImageJ launcher window and save it under macros/toolsets in the ImageJ installation. Download the NDPITools.jar, loci_tools-4-2-2.jar and jai_imageio.jar and add them to the classpath in the script that runs ImageJ. Be careful to run ImageJ with ij.ImageJ like below:

Select the "MRI_NDPI_Tools" toolset from the >> button of the ImageJ launcher.

The first step is to extract an image with a given resolution from the ndpi-files and to save it as a tif-image. Press the c-button. A file-dialog will open. Select the folder that contains the ndpi-images that you want to convert. All ndpi-images in the folder must contain the same resolutions. There should be nothing else in the folder. After you selected a folder the available resolutions will be read. This can take a moment. You can then select the resolution you want in a dialog. Note that the tool will most likely not be able to handle the highest resolution.

The exported tif-images will be written into a subfolder tif of the folder that contains the input images. 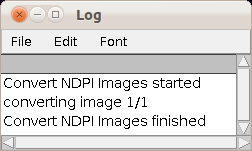 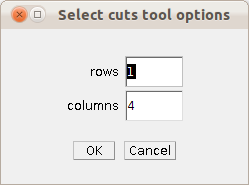 You can adjust the number of rows and columns of cuts on the slide.