The Colony Blob Count Tool helps to count colonies and measure the areas of the colonies. The bacteria colonies are supposed to appear as blobs on the image (in contrast to cases where they appear as small spots, see this macro for the second case). An example image can be found here.

To install the tools, drag the link Colony_Blob_Count_Tool.txt to the ImageJ launcher window, save it under macros/toolsets in the ImageJ installation and restart ImageJ.

Select the "Colony_Blob_Count_Tool" toolset from the >> button of the ImageJ launcher.

If the image has a selection, only the selected region is taken into account. Note that you can save an image with a selection in the tif-format with ImageJ. The colony-blobs should be dark on a light background. Otherwise you have to inverse the contrast of the image. For each detected blob a roi is added to the roi-manager.

Right-click on the s-button to open the options dialog of the tool. 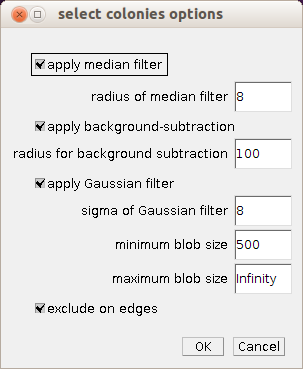 After you ran "select colonies" press the c-button to count the selected colonies and measure the areas. The counting and measurement is applied to all objects in the roi-manager. You can make corrections before running the count. A table with the name colony count that contains the directory and the name of the current image, the number of colonies, the mean area, the standard deviation of the area distribution, the minimum area and the maximum area.

The area measurement for each object is displayed in the standard ImageJ results table. 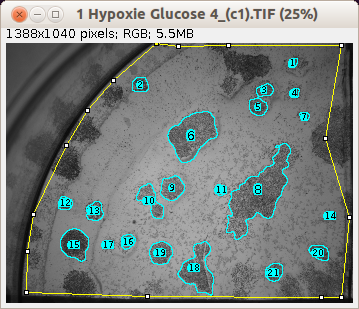 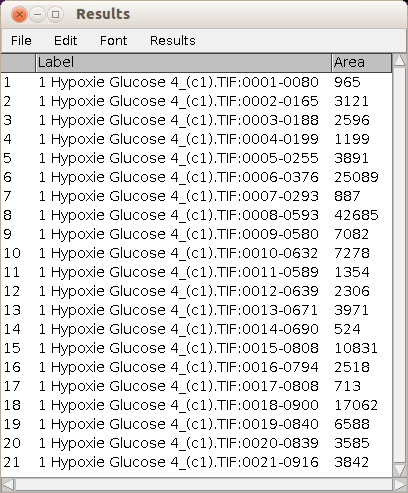